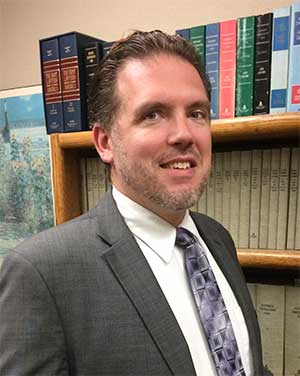 Justin Sonnicksen is a partner with the firm Gearheart and Sonnicksen in Pleasant Hill. Having graduated from USF School of Law in 2002, he has practiced exclusively in the field of workers’ compensation since April of 2003. His first position as an attorney after law school was with the firm Haworth Bradshaw in San Jose for 2 years. He was then an associate with the firm Hanna Brophy in Oakland for 6 years. He became an applicant attorney in 2011 and worked for the firm Pegnim and Ivancich as an associate for 3 years. He has been an attorney with the Law Office for Mark Gearheart since September of 2014.

Mr. Sonnicksen is a certified legal specialist in the field of workers’ compensation. He is a past Board member of the South Bay Industrial Claims Association. He served on the Executive Committee of the Workers’ Compensation Section of the State Bar of California from 2012 - 2015. He has published articles for the State Bar’s Workers’ Compensation Quarterly and is a frequent speaker on the topic of workers’ compensation law for various organizations, including CAAA. He is the past President of the East Bay Chapter of the California Applicant Attorneys’ Association and is a member of the Board of Directors of CAAA. He also frequently serves as Judge Pro Tem at the Oakland district office of the WCAB.

Additionally, he has prepared amicus curiae briefs on behalf of CAAA for cases litigated at the Court of Appeal and is the current co chair of the CAAA amicus committee.

He is a native of the great state of Indiana and in 1998 obtained a BA degree in Political Science from Indiana University. He is the father of an adorable daughter, Sophia.

Mr. Sonnicksen was an attorney of record in the following cases litigated at the WCAB-